Treehugger ... Book One of the Based on a Dream trilogy

Available in Print and e-reader Formats

Book One of the trilogy,
Based on a Dream...

is a Young Adult Fantasy Novel

For fourteen-year-old Chloe, planet hopping is 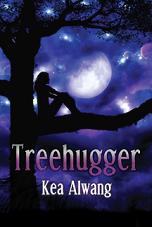 a gift. Righting the wrongs of the multiverse on behalf of a mysterious life form is a privilege. Leading a double life has its perks. Being Earth-born, however, simply bites.

Chloe knows she will never fit in when high school starts; that’s a given. It’s not like she can reveal her true self and her unusual abilities on Earth anyway. She used to be okay with that, as long as her two best friends were part of her extraterrestrial life, understanding her the way nobody else could.

Now two-thirds short of feeling whole, Chloe becomes an enemy to herself just as a terrifying nemesis threatens to resurface. Can she fight through weakened skills, fearsome flashbacks, and evolving relationships to meet her future head on? Does it really matter what world you’re on when trying to find yourself?

print on Amazon.com and BN.com

for Kindle on Amazon.com

for NOOK on BN.com

"I read this story in less than 24 hours. I could not put it down. The fantasy world I was taken to brings me to a place I wish I could stay. I am 28 years old but totally related to the heroine. I remember feeling out of place ridiculed and isolated as does Chloe on Earth. Her alternate world was her element, my 14 yr old self had many fantasy places. This story is nothing like the Twilight-esque fantasy world many YA authors are creating. This one is a whole other world, literally. Acceptance is something humans crave and sometimes its not on Earth where we may find it. Allow yourself to escape to place where you can be whoever you want to be. I look forward to the next book and I have to say it- George Lucas watch out another visonary is here!"
- Nicole, Amazon reader

*****
"...I absolutely loved everything about this book! The author's writing style was amazing. She seamlessly switched from present to past in a way that made it so easy to follow! I also love the characters and how the perspective changed. First we feel so bad for Chloe, beginning at the slumber party, to her depression. When the perspective changes, we can see how other people feel and how minuscule her problems really are. The author jumps right into the story, but gives the backround info in a way that does not sound listy and boring. Seeing the main character pick herself up both on Earth and Jacondor, and take control of her double life is amazing to read...."

Read the rest of Aijah's 5-star  review of Treehugger on her blog, Fairy Page or on Goodreads.com.

*****
"Kea Alwang's writing style made the entire adventure wholly believable, fun (or gut-wrenching, but really, there's a review for another day), and allowed the characters to linger long after you close the book for the moment or for the last time. The amount of detail in the worlds and characters give them an almost nostalgic quality while also creating places that I would have never thought of--and put a new twist on the old theme of teenage isolation and resistance to change.

With her friends off in the far corners of the multiverses, the main character Chloe (known intergalacticaly as Star) who has never been able to relate to her high-school peers (due to being taught about concepts far beyond humanity's reach), is starting to question why she protects the self-serving and hurtful race she belongs to; and when meeting her friends again, something has changed in their relationship dynamics, one of the only things Chloe was clinging to. While group dynamics mostly mend, I can't help but think that tensions will soon soar, creating a highly interesting plot point for the books said to come."                     - Maureen D., Amazon reader

*****
Great Read..for teenagers and adults alike. This book is not only heartwarming but fun the story takes you to another world ..another dimension..and holds you there to the point where you think your in that world for real. Someone should make this into a movie.
-MnM31, BN.com reviewer

****A Hidden Treasure! Review on Amazon.co.uk!

****Review from Krystal Larson of the book review blog, Live to Read.