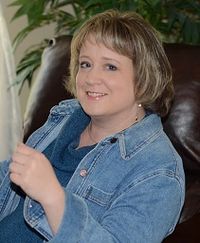 Hello and welcome to my site!

I spend a lot of time at the keyboard worldbuilding, socializing, and fan girling. I also do a lot of reading, indulging in severe caffeine and chocolate addictions, and going to the gym. Okay, wait ... I don't spend a lot of time at the gym. I do go ... occasionally ... and need to get there far more often. My goal is to wipe that last sentence off this bio and just state that I go to the gym often. Anyway, I live in New Jersey with my  podcaster husband (you can find his entertainment podcast here), my film-obsessed son (who I refer to as "Spielberg boy" or SB on the blog), book-munching daughter (known as "Energizer Bunny Girl" or EBG), and a self-absorbed parakeet named Weasley (yes, after the Harry Potter Weasleys. We had Dobby, too, but he, unfortunately, met the same fate as his namesake.) Together, we're a proud entertainment geek family.

Favorite Book: Too many to name, really. Animal Dreams by Barbara Kingsolver is one of them. Then there's The Host by Stephenie Meyer, Planet Pirates series by Anne McCaffrey, the Hunger Games trilogy, Matched by Ally Condie (but, not so much the other two), The Outsiders by S.E. Hinton, Mists of Avalon by Marion Zimmer Bradley, the Divergent Series by Veronica Roth, She's Come Undone by Wally Lamb, Posionwood Bible by Barbara Kingsolver, Harry Potter by JK Rowling

Favorite Films: Among many, Forrest Gump, Star Wars (all -- yes, all), Whale Rider, Cinema Paradiso, I am Sam, Titanic, Lord of the Rings trilogy, Star Trek (except 1 and 5) Terminator, Aliens, Harry Potter (number three and up), Shawshank Redemption, Dances with Wolves, Inception, The Breakfast Club, Eternal Sunshine of the Spotless Mind....

Favorite Places to be: The mountains, Disneyworld, Star Wars Celebration, watching a movie with my family

Hates: Bullying, generalizations, liver and onions, people who will do anything to cover their rears, olives, the superficial, the word "moist."

Worst Job: folding and banding newspaper circulars while in highschool