As a speculative fiction writer, I deal with and live for fantastic worlds and unlikely stories. Sometimes, as a writer, you throw yourself plot curve balls to break writer's block or move the action in a new direction. Sometimes you simply want to throw the unexpected at readers. Sometimes such attempts just wind up totally stupid and out of left field. Those stupid moments get trashed. But today, I'm thankful for real-life stupid moments that turn a bad mood around. I had that sort of moment yesterday:

Energizer Bunny Girl and I had left the house for her rock-climbing practice. I needed gas and I needed a giant cup of coffee (I write in the lobby of the climbing venue for two hours while she climbs.) So we pulled into the Dunkin' Donuts parking lot, and I reached into my bag for my purse--which wasn't there. No coffee. No gas. No driver's license if I get pulled over. Now Murphy, his law, and I are tight, so I knew I had to go home (8 minutes back) and get my purse. I did so, but at the cost of running late.

Take two:  We're back on the road. EBK is stressing that she'll have to do umpteen extra rounds of warmup for being late, and I know I don't have time to get gas or coffee.  She's nagging me; I'm grumbling and tense. We're back on the road, approaching the highway, when I realize I'm heading to the on ramp of the wrong highway. I use two highways regularly and well ... ooops! So now I'm practically growling, EBK is wondering what sort of alien organism is eating away at her mother's brain, and I turn onto a dead end street to make a U-ee.

As I drive down the street to find a good place to turn, we come across two wild turkeys walking down the side of the road--not a common sight by me. I've seen one other in the fifteen years I've live here. It was so unexpected that we began laughing. Realizing that the dumb turkey I feel like has come upon actual turkeys, I roll down the window as EBK and I make turkey noises. Then I remember a story about a flying turkey slamming into someone's windshield, so I quickly roll up the window as they move closer. We continue past, make the U-ee, and ... suddenly we have two turkeys charging the car! I veer left, they follow, right, they follow. I slow down and stop the car. They move under the car, EBK and I can't stop laughing, and after a minute, we see this: 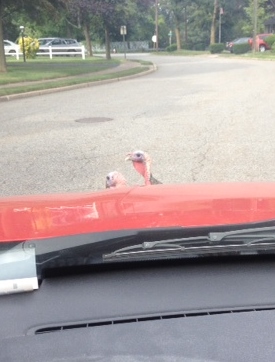 And they won't move.  I don't dare get out of the car to scare them  off, because obviously our turkey talk offended them, so I hit the horn. They practically scream back at us for a couple of minutes, and then one moves to the driver side, clearly ticked off: 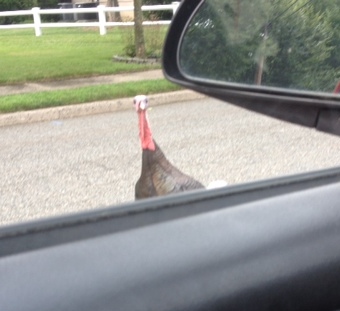 I call this shot, "Wanna piece of me?"

Eventually, the turkey at the front of the car takes off, and the one on the side loses interest: 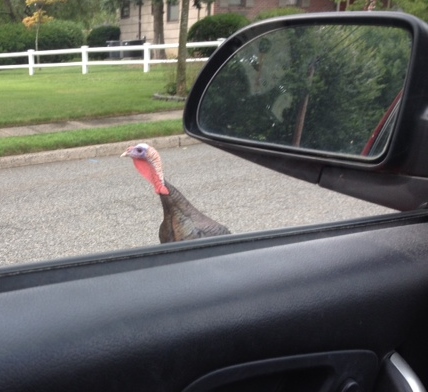 There is nothing like an attempted carjacking by two turkeys to put you in a better mood. It's okay to be late. It's better to have a stupid moment. It would have been priceless to have the presence of mind to record the entire thing and put it on YouTube. But that probably requires a brain that remembers its purse and which highway to take. :)

Sometimes, when it seems like you've lost far more than you've gained, it's tough to "look on the bright side" of things ... to see a silver lining of sorts. In fact, sometimes you just want to punch the person who suggests you do so.  Of course, people don't express themselves that way to make you feel worse. So what sort of person would deck someone who is only trying to help? After all, they could be right. My family's future has never been so uncertain, but don't the most unexpected doors open when you let go of (or get ripped away from) comfort zones to navigate chaos? (Say 'yes', won't you? I'm counting on it!) The goal for my blog this summer is to pepper it with positive posts about the good things going on in my life. Today? My backyard ... aka ... the outdoor office. 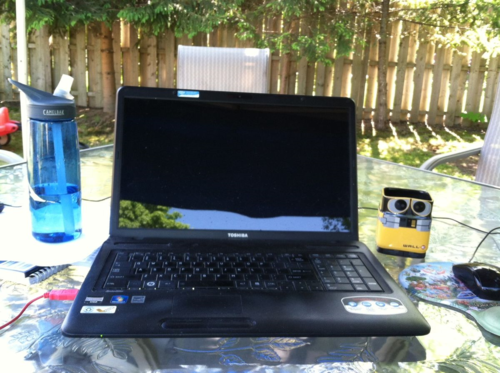 My yard is not the sort you'll find in Better Homes & Gardens. It is a nice size, but we don't exactly have a landscaping budget, so other than mowing and planting a few living things here or there, nature is our interior ... or exterior, rather, decorator. There are uneven patches of grass, the shed is weakening, and chipmunk holes pop up all over the place. Not to mention, my grass gets cigarette butts dropped on it, courtesy of the neighbors. 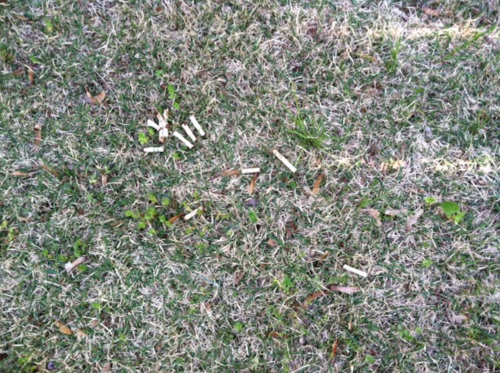 Yeeeehp, that's right. Nice, huh? We're hoping the most recent exchange over that issue will encourage them to keep the piggery on their side of the fence.

All that said, my yard is my sanctuary in the summer, and truthfully? I don't mind the chipmunk population and their holes. In fact, I can only imagine the catacombs they have going on below ground.  Insane squirrels spar on top of my fence. Birds gather around the bird feeder, and Energizer Bunny Girl creates chalk art on the back of the house each summer. 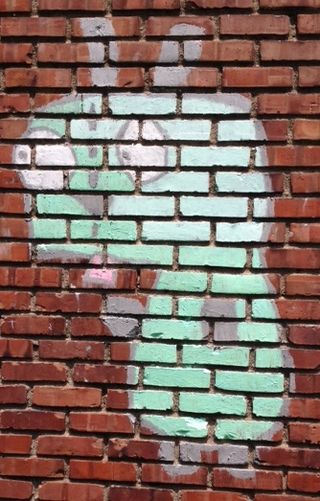 So I'm thankful for this place, aware that not everyone has a backyard. And I'll bet some people have neighbors capable of throwing worse over the fence than cigarettes. So my yard is a fabulous blessing with its two trees that grew the perfect distance apart for a hammock... And the hammock, while not in the best shape, is the best place ever for reading over work. We have a pool we've put up every summer for five years now. Each summer there's a new hole that needs patching, but (knock on wood) it still holds itself up! 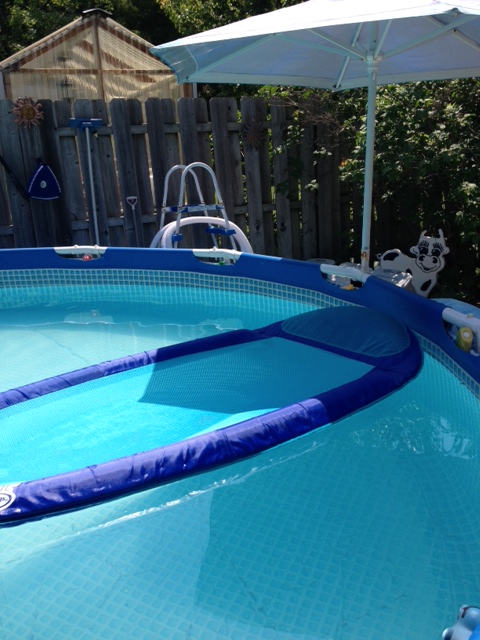 I get visited by all sorts of "muses" when I work in the "outdoor office," and they demonstrate that being around nature truly is soothing. Some of my muses are a bit more welcome than others.... 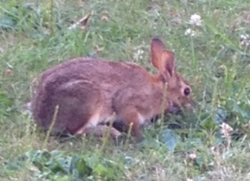 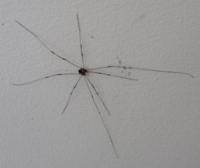 So for as long as I have it, I'm going to enjoy my yard this summer, write within its fences while Grooveshark  plays in the backround, ignore the neighbors, not care that most wouldn't consider this fine outdoor living, and pour myself into books ... the ones I write and the ones I read.

What's on your bright side this summer?

Congratulations to fellow Infinite Ink Author, Nicole Ciacchella, on the release of her third and final book in the Contributor series! Please check out her dystopian YA series! 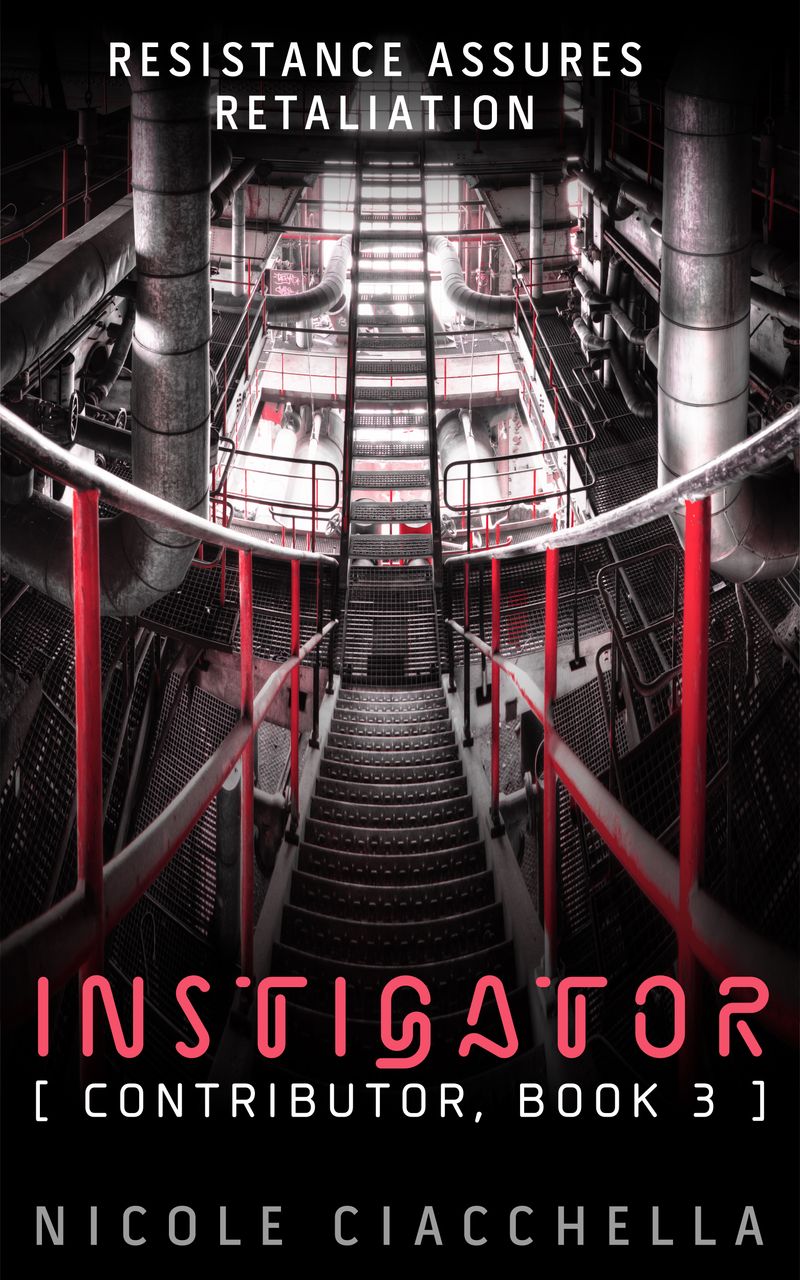 The final book in the post-apocalyptic and dystopian young adult/new adult Contributor trilogy.

Disillusioned and angry at the revelation of the Free Thinkers’ secret patron, Dara isn’t sure whether her decision to join them was the right choice. Guilt over Letizia’s loss plagues her, and she feels betrayed by one of the few people in whom she placed her trust.

Adjusting to life outside of the domes hasn’t been easy over the past six months, especially because the Free Thinkers’ progress is so frustratingly slow. Nothing has changed, and she doesn’t know how much longer she can deny her searing need for vengeance, or even whether she should place her faith in the Free Thinkers. The more the truth about both them and the Creators is revealed, the less certain she is that the two are all that different. What if she handed them the incriminating evidence they need to exploit to ensure a future that looks a lot like what the Creators envisioned?

“Storm coming?” Javier asked, joining her. He folded his arms over his chest, adopting his usual carefree expression and posture, but she’d come to know he wore it like a mask. Almost everything he did was calculated, and behind his placid exterior was a mind rarely at rest.

“I don’t think so,” she said after studying the sky for a moment longer. Conditions didn’t feel quite right for the vicious dust storms that ripped through the area with surprising frequency but little warning. She had developed a healthy respect for them; they were not to be messed with.

“Another sabotage mission completed,” he remarked. He sounded as if he were satisfied with a day’s work well done, but she heard a note of something in his voice, a note that mirrored the disquiet in her own head.

“Prick, prick, prick,” she said, unable to keep the sarcasm from her tone. “Think the Creators will bleed to death anytime soon?”

He smiled. “Doubtful. Still, I guess we are annoying them and setting back their master plan. They can’t be too happy with us about that.”

“So they have to wait for their toys. Poor dears.” Disdain dripped from her words, but the thought didn’t make her feel any better. Who cared if they inconvenienced the Creators? Inconveniencing them was the least of what she’d had in mind.

“The time isn’t right. You must be patient,” he said, mimicking Mal’s tight voice, making Dara smile despite herself.

“I’m really sick of that word.”

“You’re not alone there.”

“Do you think an actual plan exists?”

“Depends on which day of the week it is,” he said, giving her a crooked smile. He leaned against a rusting beam, seeming unconcerned about it crumbling under his weight. “I know they have plenty of plans, I’m just not sure what those plans are and whether they’re the plans I’d like them to be.”

“Raj keeps telling me we can’t be rash.”

“Inertia. I thought the Creators were the only ones who suffered from it. Looks like I was wrong about that.” 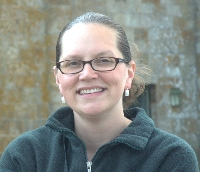 Nicole has progressed from scribbling in notebooks to banging on keyboards, but she's never managed to stop daydreaming at inappropriate moments.

When not answering the demands of her characters, Nicole can often be found curled up with a good book or spending far too many hours acting the hero in whatever video game is her obsession of the moment.

One of Nicole's other great passions is travel. She loves being married to a native Belgian, both because she likes the idea of being "The American" and because it gives her plenty of excuses to visit Europe—that wondrous land of coffee, chocolate, pastry, and some other stuff—as often as possible.

Michigan born and raised, Nicole lives there with her honorary Michigander/Belgian husband and her two children. A Michigan State University alum, Nicole bleeds green and is a Spartan for life.