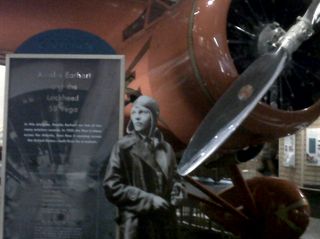 So this is it: my first entry on this blog.  My first leap into blogging as a fiction author.

Finishing my novel is a big deal for me, as it would be for most people. I know it sounds sooo utterly cliche, but this book is my third kid.  After having two real babies naturally, without drugs ... well, I could go on comparing labor and raising children with bringing forth a novel, but I'll leave it at this: Both enterprises are a risky business.

So how do we determine whether to take a risk or not? The main character in my novel, Chloe (aka Star of Earth) describes a risk this way:

"… a risk is only as good as its outcome. Think about it: Neil Armstrong set foot on the moon, lived to tell about it, and had people shouting, “Way to go, Neil!” On the other hand, you know there had to be a point when Amelia Earhart, on her risky flight around the equator, suddenly let out a regretful, “Oh, crap!”

It's the truth, isn't it? We take a risk, it turns out well, and people pat us on the back. Perhaps they call us industrious, brave, or a freakin' genius! What happens if you take that same risk, but end up with your tail between your legs? The good people in our life might tell us, "Well, at least you tried." And as far as that line goes for cheering us up, well ... at least they tried. But who hasn't heard, "Well, that was pretty risky! Not sure why you chanced it!" at least once?  The only line worse than that is, "Dude ... I told you so!"

Seriously, what if the Mayflower sunk mid trip? What if Neil Armstrong took that first step on the moon, then sunk six feet deep because the moon was made of cheese (a mushy sort like brie)? Would anybody have tried again?

Fortunately for Amelia, she had a lot of success with earlier risks, so few people probably thought she was nuts to try that ill-fated flight. Before that risk that went so wrong, she had stocked up on many that went right. Nobody would or could ever call Amelia a loser.

Treehugger is my risk. I've put more years and time  into this book (and the two that follow) than I could ever admit. The lessons I've learned along the way are many. The hours of sleep I've had lately are few. So will it be worth it, this risk of putting my heart and soul on the line? Time will tell.

For now, I'd love to know your thoughts on risks. Are they really as much of a paradox as I believe they are? Have you taken risks that ended in success or nearly landed you in a straight jacket?